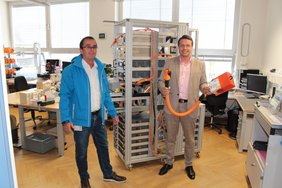 Kirchentellinsfurt, August 30, 2022 – Manuel Hailfinger, Member of the State Parliament of the southwest German state of Baden-Württemberg, dropped by Softing Automotive’s site in Kirchentellinsfurt on Thursday to find out about all the latest projects and technologies. The company has occupied the premises just south of the metropolitan region of Stuttgart for eight years now – since the merger of several Softing subsidiaries. The 60 employees at the site are engaged mainly in specific customer projects for premium southern German vehicle manufacturers and their engineering service providers. Among other things, the focus is on various development facilities for alternative drives.

Managing Director Armin Baumann started off by presenting Manuel Hailfinger with the company’s current research project, AMEISE. Softing has been involved in this mobility project, which is funded by the Baden-Württemberg Ministry of Transport, since 2020. The goal of the research project in the “Ameisenbühl” industrial park in Waiblingen is the development and research of highly automated, emission-free powered minibuses designed to ultimately become part of the public transport network. Together with its wholly owned subsidiary GlobalmatiX, Softing is responsible for data acquisition and transmission. In the last few days, a local 5G network created for this purpose has also been put into operation.

In a further research program, carried out at federal level, a fleet of around 1,000 hydrogen-powered trucks and buses are to be put on the road. Softing will also take care of the acquisition, transmission and the cloud-based archiving and analysis of the data in this project.

Once the ongoing major projects had been presented, the first unit to be viewed in the subsequent tour was “Testing and Verification Systems”. This is where systems needed in the engineering of ECUs and electronic components are designed and constructed. The specialists at Softing were already focusing on high-voltage systems ten years ago. The increasing electrification of drive concepts in the automotive industry is now having a major impact on this business segment. Softing has an excellent reputation with premium manufacturers in this area which is reflected not least in the large number of orders. In a spectrum that ranges from simple adaptations to highly complex test benches, around 75% of all projects are now being implemented in the high-voltage sector. Hailfinger was already greatly impressed at this point about just how much expertise and technical know-how are available at the Softing site in Kirchentellinsfurt, concluding that the company seems perfectly prepared for current and future drive technologies.

The politician also took a look at the electronic hardware engineering department. This is where electronic components based on microcontrollers are developed to enable communication with the vehicle. This functionality plays a central role in vehicle engineering and development. Vehicles already communicate with the relevant facilities in manufacturing using these VCIs (Vehicle Communication Interface). A report published recently about a 10 million Euro contract from a premium vehicle manufacturer features exactly such components. The project involves the transmission of massive amounts of data to the ECUs in just a few minutes.

An increasingly important technology is cloud-based telematics, i.e. the acquisition of data in vehicles and its transmission to a central data cloud. In Softing’s case, this is taken care of by its subsidiary GlobalmatiX. The competence center in Kirchentellinsfurt currently totals ten employees. This was when it became clear to Hailfinger why there are so many vehicles of Europe’s largest motorhome rental company standing on Softing’s forecourt: The entire fleet is currently being fitted out with the smart GlobalmatiX telematics solution.

Manuel Hailfinger’s visit was rounded off by discussions with the engineers who implement custom projects in vehicle diagnostics. Unfortunately, Softing has had to turn down a number of projects due to the lack of skilled workers. This problem is something all Softing departments are having to face along with the difficulties in the procurement of electronic components. Delivery times of up to two years are now not uncommon. As spokesman on labor policy for the conservative CDU parliamentary group, Hailfinger stressed that in fact the shortage of skilled workers is one of the largest problems companies in Baden-Württemberg are having to combat. “We are going to have to link securing skilled workers with innovation policy more to reduce the gaps in skilled labor,” said the politician who represents the constituency of Hechingen-Münsingen.

As he left, Manuel Hailfinger stressed once again just how positive an impression he had gained during his visit and went on to say that the parent company in Haar near Munich could be proud of its technology center at the heart of Baden-Württemberg. As the southwest German state and Bavaria are traditionally rivals, Armin Baumann said he would take great pleasure as a genuine Swabian in handing on this message to the Bavarian HQ.

Softing Automotive provides diagnostic and test solutions for the entire life cycle of electronic control units as well as entire vehicle systems. All over the world, leading vehicle manufacturers, system and ECU providers have been relying on tried and tested tools and solutions from Softing for more than 40 years now.

In its developments, Softing Automotive relies on standardization which is why Softing is an active member of the most important standardization committees in automotive electronics, such as SAE International, ASAM and ISO. Softing is one of the market leaders with over 100,000 installations in the growth market of test and diagnostic systems in vehicle electronics.

This website uses cookies. Those have two functions: On the one hand they are providing basic functionality for this website. On the other hand they allow us to improve our content for you by saving and analyzing anonymized user data. You can redraw your consent to using these cookies at any time. Find more information regarding cookies on our Data Protection Declaration and regarding us on the Imprint.